Mission Statement: At Eton elementary, I am inspired to think, to learn, to achieve, and to care! 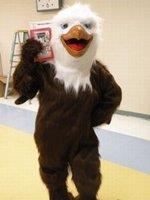 Motto: Where Eagles Learn to SOAR!

The community that is called Eton actually had its beginnings in 1833, with the name Pleasant Valley. Around 1880, another community was growing in this part of Murray County by the name of Dunn. During this same time period, a prominent Murray Countian by the name of W.R. Davis moved his family from Fashion to Pleasant Valley. This move was made because of the excellent educational facility named for the town. Mr. Davis became Post Master of Pleasant Valley and named his post office Eton, after Eaton, England, because of the reputable educational facility there.

In 1905, the L&N Railroad came through this area prompting Pleasant Valley and Dunn to merge, forming the town of Eton. By 1938, Eton Elementary School was built on land obtained from the Eton Town Company. To accommodate the growing community, numerous classrooms were added throughout the years. This building held elementary classes for 59 years until 1997.

The new Eton Elementary building was completed during the 1996-1997 school year. We began holding classes here in the fall of 1997.

Eton Elementary School is one of six elementary schools in the Murray County System. For more information about our school system, visit http://www.murray.k12.ga.us/